Xi’an has much to offer besides the main sites such as the Terracotta Warriors, the Small and the Big Wild Goose Pagoda, Beiyuanmen “Muslim Street” with the Great Mosque and numerous burial sites. Not every attraction is suitable for everyone so you got to choose what you really would like to see in case of a short visit as usually two or three days are just not enough to see much. And believe me, there is so much to see that it takes months just to visit all the places advertised in city guides and other sources.

During all my visits in Xi’an I have probably visited all major tourist spots and multiple locations which are more known to the locals. This resulted during my last visit that I felt kind of empty. I wanted to see more of the city but my wife had no motivation to just go through the streets, she wanted to visit only spots she hasn’t seen before. So I started my research on search engines for some place we haven’t visited yet and after a long day I found it; something called the Gao Family Mansion located in Beiyuanmen. Wait, what? Located at the Muslim street? I had been several times and never ever saw anything like this Mansion nor did my wife or her parents have any idea about it.

Next day we headed to Beiyuanmen (just 5min walk from my parents-in-law’s home) in search of that building. We walked about and down there for around 30min with no luck until we saw a little tourist group going through an entrance between food vendors. We followed them and there it was, the place we had been searching for: The Gao Family Mansion

Now first some basic information about the Gao Family Mansion:

I don’t remember the entrance fee anymore but it was very cheap. Inside the mansion you can spend some more money on a tea ceremony and a shadow puppetry show but we skipped those. I guess we walked around for nearly two hours there, going through the several rooms and floors (my wife loved the talking myna birds because of their compliments to her beauty and I was fascinated by the turtles).

I can only recommend a visit there, it is pretty much in the middle of Beiyuanmen, there is much to see for little money and most importantly it is very quiet there. As long as you don’t look up to the neighbouring buildings you can’t believe that you are actually in the center of bustling city with over 8 million inhabitants. 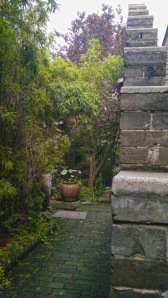 Do you have found any wonderful places which are not heavily advertised in other cities?

Some more information of the Gao Family Mansion: