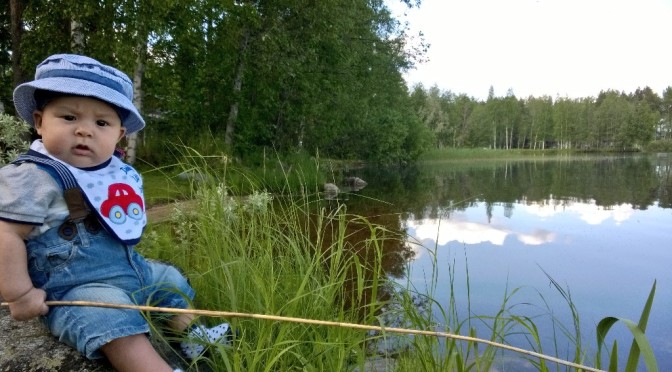 I think the title is pretty much self-explanatory. Today I will touch this topic as we live now already for more than a year in Germany after living for nearly eight years in Finland. The years in Finland were surely exciting and we had no urge to move anywhere to soon however few months before Nathan was born we made from one day to another the decision to move to Germany. Then in 2014 our son was born, shortly after that we got our apartment in my old hometown and planned the whole moving process which took  the whole summer.  More about what happened in 2014 can be found in this summary I wrote in the end of last year. All the things which will be listed here are from our own experiences and can (and will!) vary as it always depends on the person plus the area where you live in/ surroundings.

The first thing which comes to my mind is the nature. Finland got an amazing nature even in the cities. You got those huge forests, thousands of lakes, the Baltic sea, part of the country is even within the Arctic Circle and so clean air. Sure, Germany also got many beautiful things to offer but all in all it just can’t keep up with Finland when you are used to wild forests just behind your building while as in Germany you got to travel some longer distances to enjoy some real nature. Just thinking about my parents cottage in Finland makes me want to book a ticket and fly asap there though on second thought I might postpone that to next summer to enjoy the never setting sun and some warmer temperatures than now. So which country do we prefer when it comes nature? Finland of course!

The next point on this list is a very important one, the living costs! While living in Finland all those years we surely felt that live wasn’t cheap there but we never realized just how expensive everything is until we moved to Germany and needed to do our first grocery shopping. Just unbelievable, in average everything was suddenly only half price than what we were used to in Finland and some little things such as garlic, ginger etc up to only 1/10 of the Finnish prices. Through this we are already able to spend half the money per months than what we had to in Finland! You might think that in Finland you must earn more in order to sustain higher prices but the average income is only slightly higher than in Germany (speaking out of our own experiences and what we heard from friends). Germany is the clear winner when thinking about living costs and any other costs such as for clothes, anything you wish to buy or just going out to eat!

The food…food is really something which can’t be really labeled as good or bad as it clearly depends on the person. In our case it depends entirely on me as my wife doesn’t like Finnish nor German food. In my opinion Germany got the better food and much more variety than Finland. As I said, it depends on the person and I grew up in Germany so all my thoughts about this topic are biased and thus useless for this list. I can’t even think about too many Finnish dishes except of some of the standards in Finland such as Karelian Pasty and some rye  bread which I really enjoyed . However what I certainly loved in Finland are the sweets / the love for black liquorice candy and even food and drinks with wood tar flavor! In Germany there is just too much to choose from and I don’t even know where to start as each region or even town has their special dishes so in the end I just say Germany is the winner though I know there will be now an outcry from every Finnish person in the world (thankfully not too many Finnish people out there).

The mentality of the people is something really interesting. Most people from around the world have the general idea that Germans are very cold people and don’t show much emotions. Well…don’t go to Finland then as you might think the people are emotionally dead. Sometime ago there was a great satirical blog post on the Helsingin Sanomat (the national newspaper in Finland) about Finnish men called “Tis is Finland Män”. Of course everything exaggerated in that article but in its core it is a perfect description about the people in Finland and their mentality. Here in Germany we met some people who lived all their life in other countries such as China and USA. So when they told us about what they think about German people and how unfriendly they all are we were just shocked. For us it felt like we were suddenly surrounded by friendly open-minded people who all seem to care about you unlike in Finland where the general view is “Not shou emousshiöns.” Even my crazy Chinese mother-in-law who doesn’t speak any Finnish or German said after short time in Germany that the people here are so much more friendly than in Finland, not a good sign Finland!

These are just the main points I like to compare as I don’t want to go into politics or similar topics as they are for many dead boring or not interesting for us/ me. In general I can say that we prefer living in Germany right now but who knows, it might change in some years again. There is only one point both countries have in common and fail miserable at: Keeping MIL out!

Have you lived in different countries and did also such evaluation on what country you prefer the most?

43 thoughts on “Differences between living in Germany and Finland”