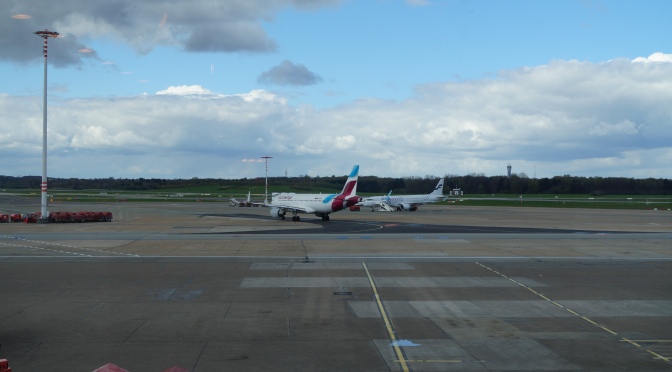 My crazy Chinese mother-in-law is back. I mentioned in the last post already that some destructive force is living with us once again and I have to say that so much has happened already in the past two weeks. I do not know how she does it but she certainly has this profound ability to wreak havoc where ever she is. It is not only about the stuff she can destroy without even trying it is also about the way she thinks (mentioned multiple times on this blog already). In her opinion there is only one way to do something: Her Way.

Though the title of this article is Airport Adventures is actually started already before she even reach any airport. Just two weeks before flying to Germany my wife double checked with her that everything is in order. This means that all necessary snacks for us have been packed (serious business!) and that she has all documents with her. Documents such as the invitation letter that she needed to get the Visa and also is required to have on person when arriving in Germany as there is our telephone number listed so the border control can call us when needed. This is important as MIL has messed it up before in 2014 when she was nearly sent back to China again. When you have such a traumatic experience you will always remember what mistakes to avoid – not MIL. She did not only forget about the whole invitation letter but she had thrown it away months ago! All she had to say way “I didn’t know that this is important”.  Well she also threw away her flight tickets because she had taken pictures of them with the phone so that should be enough according to her…

As you see we had our fair share of trouble already before she entered the plane. Needless to say my wife had to organize all the papers in record time and get them somehow to China in that short time period. After that my wife actually thought that the worst was over before her arriving in Germany, oh how wrong she was or let’s say how naive. The journey started pretty well as she got from Xi’an to Helsinki without any troubles. In Helsinki she then had to wait for nearly three hours for her connecting flight to Hamburg.

My wife told MIL to send her a message when the boarding would start. Nothing happened within 5 min so my wife asked her again about the boarding and to take a picture of the boarding screen – no reply. Then 15 min before the boarding would close MIL said that the flight is delayed as there is no boarding. So my wife asked MIL yet again to take a picture of the boarding screen to make sure that she is at the right Gate – again ignored by MIL. Wife all nervous started to check on her phone about the flight and voila the Gate had been changed to another one just 20 metres away. Quickly she sent her mother about it and to rush to the new Gate. You can guess what happened. MIL did not listen to her daughter and still insisted that the flight was just delayed. Then when she finally went to the right Gate the plane had just left.

You can’t even imagine how furious my wife was. MIL had ignored all messages, it could have been all avoided by just taking a picture of the screen right in the beginning. MIL’s excuse was only “But I was at the right Gate, how could I believe that you would know  what is going on and which Gate to take?”. Through some miracle my dear Chinese mother-in-law got another flight to Hamburg a few hours later but it was all so exhausting especially as I had to pick her up from the airport around 1am instead of 7 pm.  This whole situation was so frustrating and I do not even dare to mention it again in front of my wife.

What is your worst Airport experience?