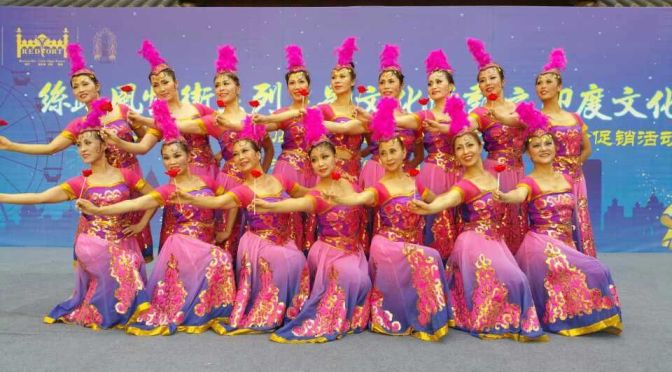 It has been already all over the news in the past years in China: The Dancing Granny Problem. Apparently there are more and more people doing their dancing routines during evening hours in Chinese cities and at the same time cause an annoyance for residents in those areas.The majority of these people is from my experience somewhere between 40 and 70 years and female. So it is no wonder that my dear mother-in-law belongs to this group of people.

My mother-in-law retired from her modeling career some 15 odd years ago and had ever since then too much time on her hands. Her favorite activities are shopping and sleeping as already mentioned here. However she has another hobby and I believe you guessed it already from the title of this article!

She started with dancing some short time after her retirement in some real classes. After few years she started one of the infamous Dancing Grannies groups and terrorizes Xi’ans city center ever since then on a daily basis. However there is one main difference which sets her group apart from most other groups: Real complicated folk dances. You see, most of the groups are dancing to overly load music each evening and only use a very limited set of different moves/ steps. Through this anybody can learn the dance in no time and join the ever-growing dancing movement. With MIL’s group it is a bit different. Her group is much smaller and consists of perhaps 20-30 people and to learn even one dance can take up a whole month. Each evening they meet for at least 90 min and first revise some old dances they had already learned and then start with new dance step by step. And don’t be mistaken because with step by step I really mean it. There are barely any repetitions in these dances so each part has to be learned bit by bit. I have been watching these dancing practices already for some time and I am just amazed how these elderly women (and few men) can remember these different dances as they are in my opinion pretty complicated.

But there is one thing which is just to typical of my MIL and I just have to share this. Every time when we come over to watch her dance she usually just sits around with some friends, chats and eats snacks. Now, as soon as she sees us she of course greets us in a way that you expect we had been away for the past decade or so and then she gets in front of her group for the next dancing steps and shows how to do them properly. You might think it is just coincidence that she starts teaching the others when we arrive, perhaps she has some set timetable or similar, but no. We have watched sometimes the group from around the corner before we arrive and it is every single time the same thing: She just sits around, jokes with her friends while the rest of the group is trying to learn the new moves. Usually she is still dancing when we leave but as soon as we are around the corner it is again the same thing, she goes back to her friends to do basically nothing. I know I know, I am just too picky with my MIL’s behavior but it is just so like her, trying to show off or appear to be a very busy person.

Even though it appears that she is resting most of the time she is actually rather good when it comes to dancing. Her group participates sometimes in a few dancing events and she is usually the lead dancer. Not bad for a woman who views shopping and sleeping as her main activities in life.

Before I forget it, MIL is the only one of her Dancing Group who is wearing the dress properly resulting in that the stomach is showing as all others pull up their skirts more because they think that they will look shorter when they tummy is visible…what troubles those poor people have.