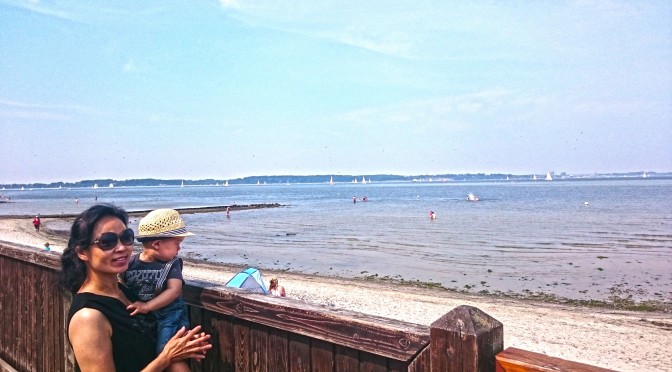 It is once again time to say farewell to my Chinese mother-in-law. This sunday she will head back to China and thus her three-month reign of terror will come to an end. It has been her second time to stay with us for three months and it makes me wonder what is the difference between those two visits.

First of all I have to mention what did not really change at all when comparing both three months visits. There is still the need for her to go shopping but then again she is just addicted to it. She is perfectly fine to be left alone in the Outlet Center for several hours or dropped of in some shopping district in a random city. Then there is the thing about taking pictures which only slightly changed. She surely still takes pictures and videos of nearly everything she sees but especially of Nathan. Every single day she wants us to take pictures of her together with Nathan. She is so camera focused that whenever she sees a camera just slightly pointing in her direction she starts posing, I am not joking. For example when we were in the submarine there were some guys from India taking pictures. So when they wanted to record the machines which were standing behind MIL she immediately started posing and putting on that “fake camera smile”.

So now to the things which have changed since the last time. She got better in cooking! Okay still there were times when she refused to put in any salt because it is too unhealthy but minutes later she would stuff herself with a litre of ice cream. But overall she indeed improved and these days I really love many of her noodle dishes which we have at least every second day. I think few of those noodle dishes I will miss till we go to Xi’an in August, something I would have not expected to ever happen with MIL’s cooking.

There are also few new things which pop into my mind when reflecting about the past month. She really seems not willing to learn anything new/ get rid of bad habits. I think I don’t need to mention the lovely kitchen rag anymore but she still cleans really everything with it (I did secretly change the rag multiple times though). But there is another thing. Each evening when we try to get Nathan to sleep we take him first to our bed, play with him shortly and let him slip into his dreams. Each and every single day MIL came into our bedroom checking on Nathan when he is just falling asleep resulting that he wakes up again and being very very grumpy. To this day there has been no exception to this and she truly believes that he starts crying because he wants to be held by her…it does not even cross her mind that she is the cause of him getting so upset every night.

All in all I can say that the three months passed by quickly, actually too quickly as she was a big help when it comes to take care of Nathan and preparing all the food. My wife has less time these days due to her business and I am just trying to help out whenever I am able somehow. Did you notice that I didn’t show any pictures of the apartment/ kitchen? Well, it looks like a hell here and I do not even dare to check out the kitchen myself.

How would you survive in case your mother-in-law stays with you for three months?