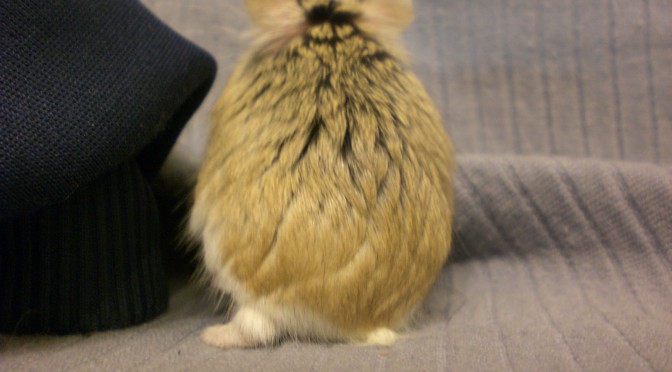 This little post is dedicated to the first pet my wife and I had together: ZhuBaoBei

ZhuBaoBei was a tiny Roborovski Hamster and we bought him in summer of 2010. These kind of hamsters are the ones you can look at but they don’t like being played with, they just want to do whatever hamsters do without being annoyed by people. We surely let him mostly do whatever he wanted but from time to time we wanted to hold him which resulted most of the time in me getting bitten by him. He was also fairly good in keeping us awake at night as hamsters are night active and they do some intense noise all night long.

Sometimes he also escaped magically from his cage (we still don’t know how he managed!) and would search his bag of food, eat a little hole in it and carry bit by bit the food to his new “nest”. Though you might think they must be rather silent when sneaking around they surely are not when eating their food! Thanks to this we could always hear when he escaped and search for his new nest which was usually under our sofa. There under the sofa he created a huge pile of food transported from his food bag. Towards the end of his life he could still meet with his new sisters, our two bunnies which we bought in summer of 2011.

I am writing this post because around this time in October 2011 he passed away. He was just a bit over two years old and I hope he had some fun during that time. He will be always in our memories even though he had such a short time with us. Now he rests in the yard of our former apartment in Finland and I just hope it is not too cold for him as Winter is coming.

Did you had any pets? What was your first one/ what are your memories of it?

28 thoughts on “Our Beloved First Pet”