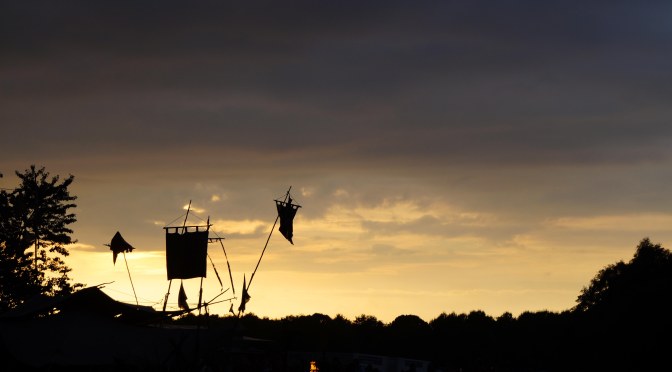 Ever since we visited the big renaissance fair near my home town back in 2015 we wanted to get dressed up as well for these events. The very same year we got ourselves some clothes and equipment which we tested out last autumn. This year we went once again to the big medieval market near my hometown but it was such a rainy day that we did not enjoy it entirely. However we had another very very big renaissance fair in sight this year in Hamburg Öjendorf.

What is so special about this renaissance fair? Well it is just huge. Last year I wrote how big the market was we visited near my hometown but it is just dwarfed by this one in Hamburg. Huge is not even enough to explain it. The whole festival area was 30 hectares big, over 100 military camps with over 1500 people within them, over 200 market stalls, 5 music stages, a knight’s tournament arena with 10.000 seats and and and. For this event we got ourselves tickets not only for one day but for the whole weekend in orderto be able to see everything and with the hope to have at least one dry day. Yes, we bought the weekend ticket mainly because of the terrible weather this summer as the renaissance fair this May was kind of ruined by the rainstorms.

Right from the beginning we were overwhelmed by the size of the whole area. In fact you could not never see half of the area due to the layout and the amount of people there. I think I don’t need to mention anymore how differently people are dressing up for these events as you have everything there from knights over normal peasants to even unicorns…Nathan himself went once again as a monk and gained a lot of attention. The festival area had also many little stations for children with stacked straw bales fo them to go crazy. Nathan just loved it but he was still too small to climb up, yet alone to jump down from them. Surprisingly there were each time some kids helping him up and down non-stop so he was able to enjoy it nearly as much as the bigger children.

I must say that even though we were two days there we did not see everything. Sure we managed to cover the whole area but there were different performances all over the area at different times so we missed rather many as it was a bit hard to go around and watch Nathan all the time. The biggest performances we missed once again this year which were the Pest Procession and the fire show during the night hours. One day we will manage to see those performances as the pictures I have seen about them are just stunning. We only need to figure out how to do it as we clearly can’t go with Nathan as it is just too late when they start. I am just glad that dear mother-in-law had just left us few days before this event. You can just imagine how crazy this weekend would have been with her there! Probably she would have been banned from the festival area in no time for trespassing the military camps or throwing her trash somewhere else than the trash bins.

As I have mention before we got ourselves the weekend ticket due to the unpredictable weather and it was a good decision as the first day we had sunshine and barely any wind with a following terrible rainstorm day. Even though the weather was so bad on the second day we still stayed for more than five hours there before starting our journey back home. Though it was a great experience I doubt we will go for another weekend like this again. It is just too exhausting in the end and my wife is not fond of doing her hairs and make-up on two days! I think it was a great end for us this season with the renaissance fairs. Next year we won’t be able to go to any but more about that at some later point this year.

Have you been “too long” at some event before?

30 thoughts on “A Weekend In The Middle Ages”