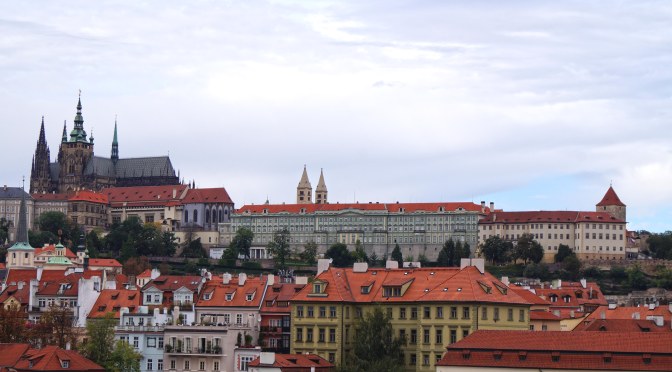 Recently we decided to have a little holiday somewhere nice in Europe. Okay it is not that recent anymore as I actually wanted to write about it for three weeks but some computer troubles kept me at bay. At first we wanted to go to Ireland but due to some visa difficulties for my wife we settled for the Czech Republic, or to be more precise for Prague. From Hamburg it takes only a bit over one hour to get to Prague by plane which is rather nice compared to the 8 hour nightmares to China.

Getting from the Prague Airport to the city center is fairly simple as it takes only about 40 min, first by bus and then by metro and it is super cheap with the tickets costing only about 1 Euro something per person. Our hotel was located in the New Town, now don’t get some modern ideas about this so-called New Town as it was founded in 1348! For me as a German who is used that many cities don’t have much historical substance left the city of Prague is just amazing. Everywhere you look in the city center you see historical buildings. I thought that Dresden was already incredible but Prague is on a whole different level. We stayed for three nights in Prague, giving us enough time to discover the city on our own pace. All the locations we visited were within walking distance except the Prague Castle for which we took another 5 min metro ride. For a family such as us this is just perfect as it makes getting around so easy.

Nathan developed right from the start his favorite spots in the city. For one there were those main locations where soap-bubble performers were active and another and most important place was Hamleys. I had no idea about this toy shop chain before as they don’t have any stores in Germany or Finland. Let’s just say the Hamleys store in Prague was a little wonder world (only 6.000 sqm…)for Nathan with a carousel in the middle of the shop, several slides (one going from the second floor down to the first!), many other different activities to offer, staff dressed up in some nice costumes and of course toys and more toys everywhere. I have no doubt Nathan could have spent the entire holiday there.  When you are in Prague and have kids you need to visit that shop (okay, even without Nathan I would go there).

On our first day we went around the area of our hotel. I was rather happy that our hotel was just a few minutes away from the famous Wenceslas Square yet another tourist site.  Everywhere in that area are restaurants so it was no problem at all to find a new place to eat for each day. However I must say that it was a bit odd that nearly every second restaurant is either Asian or Italian, just  like Little Italy and China Town combined right there in the middle of the city. Yet I don’t want to complain as it allowed us to give in my wife’s cravings for Asian food every day and then allowing me to choose another restaurant for dinner (I never get to choose usually!). Each day we tried to visit a few main attractions in Prague so we did cover at least the Wenceslas Square, Prague Castle, the Old Town, Charles Bridge any many other place within walking distance from our hotel.

During the entire trip we wondered how this holiday would have been with MIL. For some reason wherever we go and she is with us it is just too much stress. We came to the conclusion that it must be because we do not only have to watch our for Nathan but for her as well. My wife once told me it is like having two children to look out for, with the older being mentally behind the younger one. I know sounds mean but Nathan knows the animals already better than his crazy Chinese grandmother.

All in all I can say that Prague is a wonderful city and I can only recommend going there at least for a couple of days. The city has so much to offer from all the history, over the food and last but not least the beer. For us this was now the last trip we will take in a while due to some reasons to which I will come in some later blog post. I do hope that after 2017 we will be able to travel once again. Oh and sorry  with the following flood of pictures.

Have you been already to Prague or plan to go there at some point?

48 thoughts on “The Fairytale City Prague”