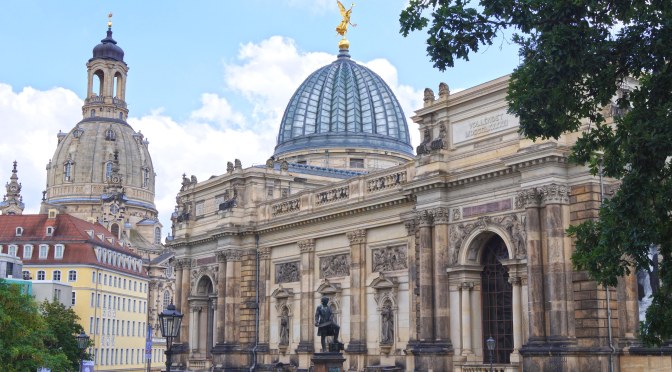 Last weekend we visited Dresden the capital city of the Free State of Saxony. It was the first time for Nathan, my wife and of course MIL to visit that part of Germany. I on the other hand had been there multiple times however I never really did see the city. The thing is I lived in East Germany, okay to be more precise in Chemnitz, for a couple of years as I went there to the Sports High School. During those years I visited a lot of cities but only for competitions and thus I usually never saw more than the swimming pool and the next McDonalds. So Dresden it was and I was really excited as I could visit an old friend from high school again.

Our journey started on an early Friday morning in my great home town. Before Dresden we decided to have a short stop in Chemnitz to grab some food and look at the Sportforum, the place where I lived, studied and trained for two years.  In Chemnitz we had our belated lunch as we arrived after roughly 6 hours  car driving fun at around 3pm there. We only stayed shortly as we wanted to arrive at the hotel in Dresden as soon as possible and to have some daylight left to see few things around the area we stayed. From Chemnitz we had another enjoyable car ride to Dresden which lasted roughly one hour. Let’s just say that such long car rides are no fun at all. While driving through the city I was already amazed how differently it looked compared to all other cities I have visited thus far in Germany. Our hotel was located in the city district Neustadt and it was the perfect location for our needs!

For one my friend’s apartment was just 15 min away by walk. Then the city center itself with all the great sights was just 10 min away by tram and last but not least the district Neustadt was just amazing. To be precise Neustadt is divided into Inner Neustadt and Outer Neustadt but let’s not focus on such details. What we noticed first there was the huge amount of historical buildings just everywhere and then the huge amount of young people all around. Apparently Neustadt is known for its many students and it is a thriving hip district full of restaurants, bars, clubs and a lot of “alternative” shops. We just loved it there as it was so lively putting Helsinki and its hip district of Kallio to shame. During our first evening there we went to a nice Vietnamese restaurant and had some great dinner.

On the second day we went after breakfast to the historical city center and tried to see as many sights as possible. MIL was in awe as she had never seen anything like that before (actually I haven’t either!). It was just too bad that during our time there the famous Frauenkirche was closed. This Frauenkirche is a church which has been destroyed as so many other buildings there during WWII and reconstruction was only finished in 2005. Most interesting about the city center is that every buildings looks old there but in fact nearly all of the living houses are modern buildings with a classical facade because there was not so much left after the war so they reconstructed only the most famous sights and settled for modern buildings for the rest. They did a real good job in getting the old feeling back with these buildings as such is missing in nearly all German cities which suffered so high damage (Dresden was to 60% destroyed during the war and approx. 250.000 to 500.000 inhabitants and refugees died during the terrible bombings). Afer a small lunch with my friends we went to the Bastei. It is a rock formation just about 45 min away by car from Dresden Neustadt.  The rock formation is pretty famous here but also gained some world-wide attention as it was one of the desktop screens for Windows 7. Nathan loved the bridges spanning around the rock formation so much that he didn’t even want to leave anymore! Let’s just say he was rather upset when we “forced” him to come with us to the car…

Later that day we went to my friends and had some lovely BBQ in their backyard/ inner yard. As both are vegetarian we had only a small amount of meat and the rest was all about grilled vegetables and cheese. Myself I am perfectly fine to have these days a meat free BBQ but they bought for us some meat so we couldn’t say no.  When it was getting darker we walked from their home towards a bridge spanning the river Elbe to have a great view towards the historical city center. I had all my equipment ready for some great pictures but next to the bridge was some kind of music festival which resulted in annoying light and smoke disturbing the pictures.

In the end I can say it was a wonderful trip and I recommend for everyone visiting Germany to have at least one or two days in Dresden. It is a wonderful city with a lot of history and I think it is really a must see destination.  Both MIL and my wife enjoyed the time there a lot however they were not too fond of the six-hour car ride. They were especially bored on the way back when I took over music control and listened the entire way to an audiobook as I just could not face any more K-Pop.

Have you ever visited Dresden or heard about this city?