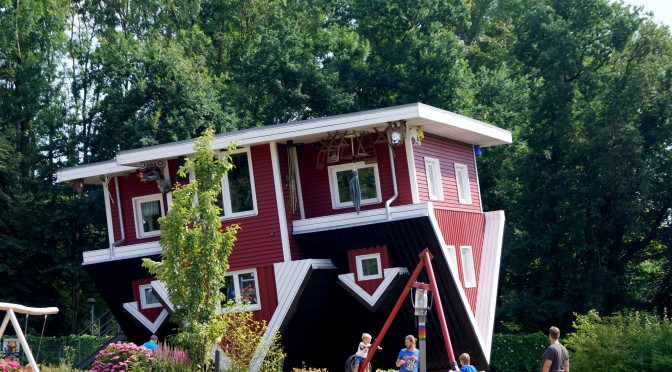 Another week another trip. This week we did not go to Lübeck as planned but to Gettorf Zoo. The zoo is just 30 min away by car and truth to be told I have never been there before. I tried to remember whether I have visited that zoo before but it really seems that it is the only one in the whole area I have never been in. The zoo started as a private animal collection and was later opened in 1968. Ever since then the zoo has gotten bigger but still remains as a family business. They have a big focus on monkeys and on tropical birds. Especially the section with the tropical birds is very interesting as you can enter many of the bird aviaries.

Right after you enter the Zoo you can see how family friendly it is as there is already at the entrance a small playground. There are several playground spread all over the zoo area with one even having a section of a wooden castle for kids to climb on going inside a skunk cage! No the kids can not go directly into the skunk cage but the castle “paths” are just a meter above the enclosure. There are signs stating that the skunks spray their nice smelling odor very rarely but it could happen at any time and that they can spray over a distance of 3m. Thankfully nothing happened while Nathan was playing there but I didn’t take any chances and stayed far away from the skunks.

The monkey enclosures are a bit different from the ones in other zoos I have visited as the smaller ones (such as the squirrel monkeys) can even leave their cage through pipes leading for example onto trees on the other side of the path. There in the trees they can climb around but they can not get down as there is a metal disk around the tree half way down. Besides those pipes there is even one bird hall where White-faced Sakis can walk freely around. As mentioned before you can enter several of the bird aviaries with all kind of different species within. At first we didn’t notice that you can enter until we saw some kids hand-feeding budgies in one of the aviaries. The birds are rather used to people walking around (you are only allowed to walk on the paths to give the animals the possibility to get some rest in other parts of the aviaries) as you can hand-feed several of them and even touch them. One African Grey Parrot was so tame that MIL thought at first that it was a toy!

In the Tropic Hall is a special program for the past few summers. This special is called “Butterly Magic” and is an enclosure you can walk through with hundreds of butterflies within. In fact there are so many that they even land on you when you stand still for a few minutes. My wife loved it until I told her that there must be also tons of caterpillars around…suddenly she wasn’t so fond of staying there any longer. MIL didn’t even care about the butterflies as she was more focused on making monkey sounds whenever we passed by a monkey enclosure.

Even though this Zoo has such a high variety of animals it is much smaller than the Zoo we have here in my hometown. It does not feel even small as all over the place are enclosures, playgrounds and other points of interest which makes the visit really interesting. Besides that the entrance fee is also pretty low at 10 Euros for an adult. We all enjoyed our visit at Gettorf Zoo and will definitely go back there again this summer with or without MIL. Especially Nathan loves the Zoo, not so much because of the animals but because of the many different playgrounds.

Have you visited a Zoo where you can entere certain animal enclosures?