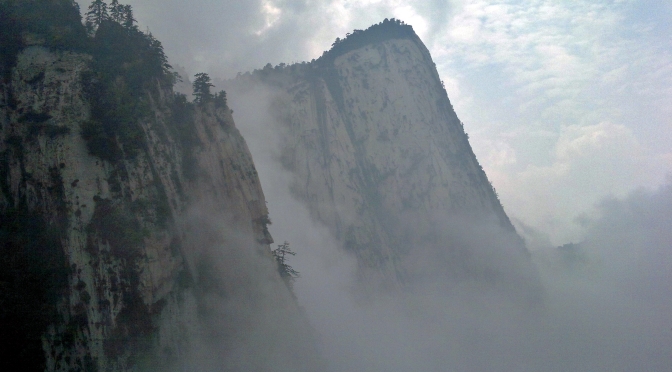 Last year we were once again for a few weeks in China, visiting my wife’s family. As usual we had some plans regarding which places we would love to visit. Number one location was Jiuzhaigou 九寨沟 http://en.wikipedia.org/wiki/Jiuzhaigou. This changed after we arrived as my wife got too lazy (it is just too tempting for her just to hang out on the sofa, watch TV and eat snacks whole day). So in order to not disappoint me too much we agreed at least to go to Mount Hua 华山as it is just an hour or so away from Xi’an, my wife’s “hometown”.

I had watched some information about Mount Hua before so I was excited to go there. My parents in law were shocked. How could we visit such a dangerous place (as if crossing a street in Xi’an is any safer than climbing the mountain…)

It took some time convincing mom in law but we were “allowed” to go there in the end. Dad in law wasn’t so happy about it. He said it is too dangerous. After some time we got to know he had been there several times. Even using the infamous Plank Walk before any security measurements have been installed (Check out http://www.wherecoolthingshappen.com/huashan-crazy-plank-walk/ to see more about the nice little path). Him using that path strikes me as fairly unusual as he is more the safety first type. Actually he is more the type not to do anything remotely dangerous. But then again, he was just 20 back in the days, trying to proof the world something.

The day prior to our climbing adventure arrived. With is also the preparation started. I received some huge backpack from some friend of the family. This backpack was filled with food, much food and a huge vacuum flask. I estimated that the weight exceeded 30 kg easily. Sure, you need some things when climbing a mountain. But that much? The whole duration on the mountain would never exceed 5 hours in our planning and yet we had food and drink for a whole week. Yet, I agreed to it, to make parents in law happy.

We left next morning and went to a village nearby the mountain. The in-laws got themselves a little hotel room, because they had to wait for us (they didn’t want to join us). In the little hotel we had some food which was enough to sustain me for two or three days. They said that I would burn much calories on the mountain and I need all the food. They also advised us to eat something every 30-45min, or we would be too weak. Mom in law also wanted us to wear thick jackets, as she was afraid we would get sick due to the low temperatures in autumn. Low temperatures are in her opinion everything under 28 degrees Celsius so the 25 degrees in the morning were life threatening. I didn’t complain and after that we set out to the entrance where we said our goodbyes.

Up the mountain and the suffering

The view was great, you could see the smog layer covering the countryside around the mountain. And fresh air, so wonderful, finally being able to breathe normally again. Basically I was happy, my wife not so much.

Now I don’t want to tell you all about the great mountain, as you should go there better yourselves. But in my opinion it was worth the high entrance fee + cable car fee. Cable car as we didn’t want to climb up the whole mountain and back again, due to our limited time and my wife’s fear of getting big leg muscles….

The climb to the different peaks on the mountain were manageable (we only went to two peaks). The main problem for me was the backpack which was getting heavier and heavier each hour. My in-laws said that we needed all the food and drink so we tried to use it. We really tried to eat and drink much, seriously but there is just so much a body can fit. In the end I still had roughly 9/10 of the stuff left when arrived at the base of the mountain in the evening again. I still wonder why we had so much mantou and meat with us. With all the food I could have fed probably half the tourists on the mountain.

The whole trip was a struggle for me to take the next step and the weight was dragging me down. Remember the jackets mom in law wanted us to wear? Oh, I was so glad we didn’t take them. It was so damn hot going up with all the weight that I might have melted with some jacket. The worst part was the way down. Due to the high weight I had to carry up my legs were a mess when we arrived the south peak. They were just shaking. Each step on the way down again I was afraid to just collapse.

All preparation was not for naught

Yes indeed, all the stuff prepared found still a use. Nah, we didn’t sell it or gave it away but we actually used it. Mind you, not the very same day but two days later we went to some zoological park. It was useful because mom in law didnt had to prepare new food and terrible because I ended up carrying everything once again. Another surprise, we didnt manage to eat everything this time either so mom in law gave it to her friends who came with us. In the end I was carrying supplies, meant for one mountain climbing adventure, over two days just to give it all away.

And before I forget, I got my revenge. When they came to visit us, I made sure that they have enough food to carry :=)

P.S. I must excuse the poor pictures, but back then I only had my Nokia N8, resulting in pictures with rather much noise.