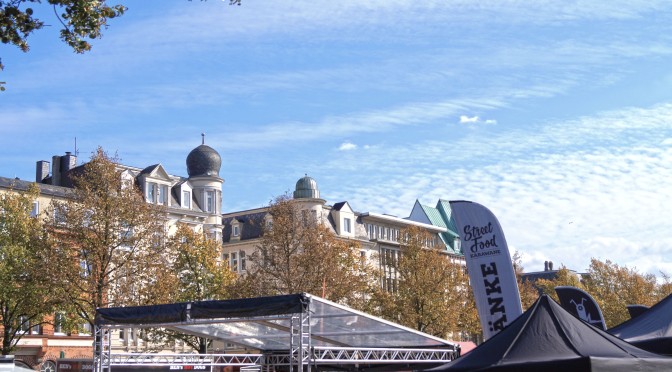 Today we had one of the few Sunday Shopping days in which the city is opened on a holy Sunday. Last year I actually wrote about this so you can find in this article more information about this stupid situation here in Germany and why there are barely any people around on Sundays. This Sunday was also a bit special as we had the yearly Duck Race in the city once again (here the article about it from 2015), we had some Street Food gathering going on and a Classic Car Meeting as well.

This year we skipped the Duck Race and I only took few pictures before the start. It is not because we have no interest in watching it but we have a little puppy who needs to get out around 3pm each day and that is also the time the race would start. We had surprisingly good weather with a lot of sunshine unlike the entire last week which had only storms for us.  I would love to tell more about the Street Food gathering but we tried to not get too close to it as it would have certainly ruined our wallets and give us some extra pounds. The only part where my wife was getting weak was the stand with Japanese styled Crêpes but thankfully the waiting line was so absurdly long that she gave up on it.

For me the highlight was the Classic Car meeting. The local club has several meetings each year but somehow I have never visited one. Always something happened such as holidays, too much rain or simply no energy to leave the apartment. It was really interesting to see cars from the last 70 years gathered here. As we are in Germany there were mostly only German brands such as Opel, Mercedes, BMW, Audi (Auto Union) and so on but there were also few US brands, British and French. My brother always wants to purchase a classic car but in the end it is just too much work to maintain it properly and you need also a safe garage as those cars can be really expensive.

This Sunday was finally a day to relax a bit. Funny enough even though we had the Sunday Shopping day we only went around the city to watch all the interesting events rather than going to any shop at all. Tomorrow and the day after we have some big things happening but more about it in next weeks blog post/ some hints on Social Media the next days.

Have you visited a Classic Car meeting?