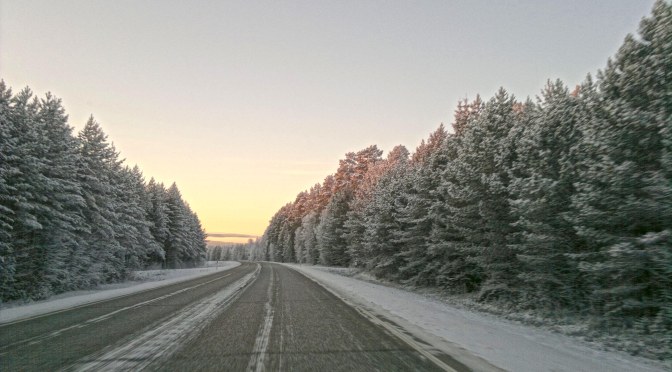 Back in 2011 we visited my wife’s friends in Sotkamo which is in the in the middle east of Finland. From Helsinki Sotkamo is about 580km away by car which means that it takes over 6 1/2 h to get there. So why my wife has friends in the middle of nowhere of Finland? In 2006 my wife started her studies in Finland. She didn’t study in Helsinki in the beginning but in Kajaani which is roughly 30km to the west of Sotkamo. She stayed there for one year until she found another university and moved to Helsinki. During that one year she made many new friends and one of them she still considers to be her best friend and that is the one we visited back then.

We went there in December which means that there is snow, too much snow all around and it is cold, too cold! We left our home near Helsinki at 6am in order to arrive at a reasonable time in Sotkamo for lunch. During those morning hours we had about -16 degrees (Celsius ~ 3 degrees Fahrenheit) which was already a challenge for my poor Diesel powered Opel Astra. Nonetheless the car managed somehow however during the drive to Sotkamo the temperatures plummeted sometimes down to -40 degrees Celsius (-40 degrees Fahrenheit). Let me just say that in never got warm inside the car and even the car engine decided not get warm and thus many other things didn’t work such as the Turbo…(really great when the car has suddenly troubles to get up a small hill!).

It was also during that trip that we had our first (and only) car crash. The whole mess happened towards the final 100km of the journey and wasn’t fun at all. You have to imagine having a road covered in a layer own snow which is compressed and thus nearly like ice at such low temperatures. Somehow I got with my right front tire too much to the right where the snow layer was higher and then everything happened rather quick. At over 80km/h (~50 mp/h) the car started spinning around crashing on the opposite lane into the fields just barely missing an oncoming truck. I don’t know how but nothing happened to us or the car! Some driver who saw everything came to our aid and managed to call on some farmer who pulled us out of the field with his tractor for very little money. I will never forget the feeling when I lost control over the car and saw during the spinning motion the truck coming closer and closer.

With some delay we managed it finally to Sotkamo where we had our lunch at the friend’s restaurant. Compared to Helsinki Sotkamo was already entirely in the Christmas season with too much snow all around. The little town is known for its skiing resort Vuokatti. It was there I tried my luck to teach my wife how to do cross-country skiing but it didn’t work out so well. In fact my wife gave up after a while so I decided to do a short 2.5 km round but got lost somehow and had to do a 15km round. The skiing center in Vuokatti is very famous in Finland as it offers a variety of possible activities such as downhill skiing, cross-country, ski jumping and there is also a cross-country skiing tunnel which makes training on snow possible during summer time. Though it offers so many sport activties we spent the least time doing any kind of sporty stuff there. My wife had more important things to do with her friends such as talking, eating, watching movies, eating and eating. As said before one of her friends got back then a Chinese restaurant in the town resulting that there was always more than enough food.

As Sotkamo is very small with only 10.000 inhabitants there is also not much to do within the city center. There are some shops around but that’s about it.  During winter it is a perfect place for winter sport enthusiasts and in summer time it offers great hiking trails. What makes this place also interesting is that it is not that far away from the Arctic Circle and Santa Claus Village in Rovaniemi where my wife visited once with her friends in 2009 but that is again stuff for another time.

Have you visited a place with more than enough snow to get already annoying for you?