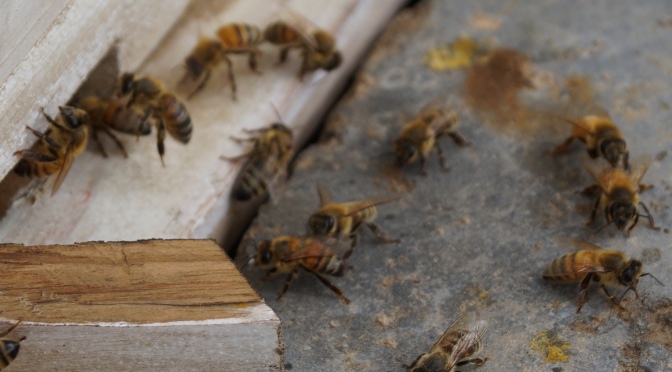 Last summer in China we visited something like an apiary (bee yard). My mother in law advertised it as an apiary with beautiful scenery she always wanted to visit. Always? No, of course not. After some inquiries by her daughter she admitted that her dancing group got an offer to visit that place, get some food and walk around the country side – for free. We both had nothing against it as it was for free so we decided to join her and the dancing group.

The tour started in early morning hours and we had to hurry to catch the little bus bringing the group to the destination. We needed to hurry, because mother in law was busy packing an absurdly huge backpack full of food and drinks, again, which I had to carry. No words of my wife could persuade her to not pack that much food even though deep down inside she must have known already that the bag would be still full by evening.

The tour itself was nothing out of the ordinary, lots of traffic jams in the city, the bus getting either too hot or too cold depending on the setting of the ac, lots of noise by the dancing group (howler monkeys are paling in comparison when it comes to noise) and their little grandchildren singing children songs through the onboard entertainment system. After a journey which felt like eternity, in an either freezing or burning hell, we arrived at our destination, a collection of some old buildings with some beehives in the yard.

From the locals sitting in the yard my wife learned that this here was just an example of an apiary and it was more like a subsidiary in order to sell the products. Selling they did! The whole dancing group went into a little house where a nice man explained the benefits of honey, beeswax, royal jelly and so forth. The people got excited and bought whatever he advertised (even the pupae which are supposedly very delicious). And who was in the middle of it? Right! Mom in law already calculating how much honey she can eat from that point onwards each day…

After we had eaten in a nearby restaurant for free and were about to be driven to the nearby mountain side for some “sightseeing” I asked my wife why they would offer this whole thing for free.  She told me that she was surprised by it as well in the beginning but after sitting in the sales pitch she learned the reason. During that one hour of selling bee products to around 20 elderly women around 20.000 RMB changed hands! That is no little pocket-money in China and furthermore they had a group before us and still a few more groups coming later on. That is some huge amount of money just for bee products and sadly the local people apparently didn’t benefit much from it. The place was totally run down, the vehicles were on the edge of falling apart so some big boss is earning himself/ herself a golden nose.

Later that day I checked what mom in law all bought and was shocked about the amount she had bought. My guess is that my parents in law are still consuming an incredible amount of honey on a daily basis at this moment. At least she didn’t went on and bought the pupae… All in all it was a nice trip even though I am still shocked by the high price for bee products there (in Finland, one of the most expensive countries in Europe, you pay less than half that amount for honey or any other of those products).

2 thoughts on “Visiting an apiary”