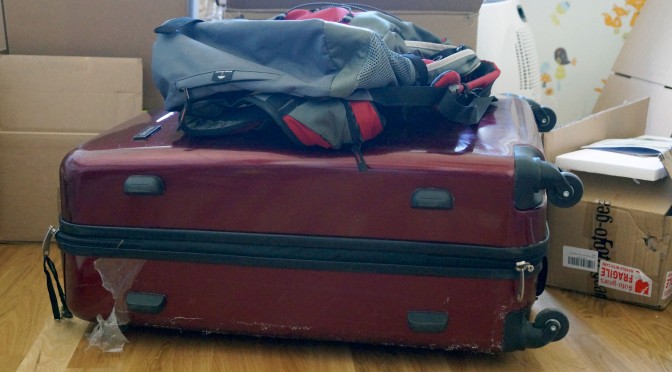 With a little tweaking these lyrics by Eminem are fitting just too well with the current situation. Thursday evening my dear mother-in-law arrived at Hamburg Airport. Actually I could already stop writing at this point as all evils have been already told for an entire week. It is rather strange to have my first blog post after my two weeks absence from blogging only about MIL but it seems like fate.

Now she has been with us already for a few days and enough has happened to fill several blog posts. On the day we picked her up from the airport nothing extraordinary happened. No horror messages came from Finland where she had to take her connecting flight to Germany. Actually I had hoped something like last year would repeat itself again but luck doesn’t seem to be my strong point right now. So once we arrived at the arrival hall I could pinpoint MIL immediately even though I saw her only for a few seconds at the luggage claim  before the doors closed again. In this moment I realized that these will be very long three months for us!

MIL wouldn’t be MIL without her doing something just plain crazy. Of course she saw us as well few minutes later  (she must have senses like a bat) and came running towards us. Yes, she ran out of the luggage claim before getting her luggage. There is a reason why the doors only open from one side so people do not enter the luggage claim who have nothing to do there. After my wife finally got a tiny bit of sense into MIL’s brain this wonderful woman tried to get back into the luggage claim. Of course it didn’t work right in the beginning and only after some other people came out she was able to return. There is always security close by so this won’t happen and then I saw two security guards looking at MIL and then at me. To avoid any more disaster I gave them the “crazy sign” for MIL so they just smiled at me and let her return.

One would think that she learned a bit from this however few minutes later she came sprinting back towards us to cuddle Nathan. This step she repeated several times and in between she talked with other Chinese pointing at us. Thankfully she got her luggage relatively quick so after twenty minutes this endeavour ended and we could start our journey back home together with MIL. Of course she wanted to hold Nathan all the time in the car and not putting him into the safety seat. Somehow she does not understand the purpose of safety seats and seatbelts as it took her over half hour and constant reminding by my wife to buckle up…

What else happened thus far with her? Oh, just minor things but just too many to list them all so I give just a brief overview of the things which stick out the most of the everyday madness. Lets start with MIL trying to give Nathan always nearly boiling water to drink. No matter how often my wife says that this is too hot she just smiles and says it is not hot for her so it is okay for Nathan. Then there is the thing of her somehow not being able to close the windows. Instead of locking them when closing the windows she just close them without locking. Hence every time there is some wind they are pushed open again.

Then there is something else entirely. As soon as she arrived in our apartment she made plans on how to “improve” our living room. Quickly she made plans to move the whole TV set to another position, move the aquarium to another corner etc. What she still did not understand yet is that we need some more people than just us to do so. Part of the TV set is hanging on the wall, it took three men installing this and furthermore once you remove it you will have big holes in the wall. Then there is the aquarium…even though it is not big the total weight amounts to over 200 kg right now, sure lets just push it to the other corner. The list goes on and on but I guess you got the idea.

Not all is bad with my Chinese mother-in-law being here as she is also a great help for my wife now. As we are planing to start a little side business my wife needs to prepare a lot for it and does not really have time to help me with the cleaning or prepare food for us. Here MIL comes in as she does all the cooking now (seems she improved in the past year, thank god!) and actually does more cleaning right now than messing it up again with her oily handprints.

How do you deal with your in-laws? What’s the longest time period you stayed with them?