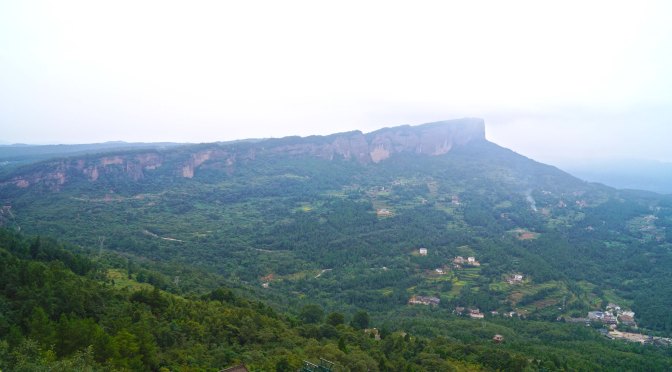 Remember all the times I wrote we never managed to go anywhere outside of Xi’an during all of our holidays there? I must admit that is not entirely true as we have visited many places around the city such as Mount Hua, the Shaanxi wild animal conversation research center and the Zoological Park. These places are not that far away from Xi’an however once we managed it even into another Province: Sichuan! I had nearly forgotten about it but untill I stumbled upon the pictures. This particular trip was at the Jianmenguan Pass which has much history behind it (like nearly every other place in China…).

We got to that mountain area by bus which we took from Xi’an. I don’t remember anymore how long the trip was exactly but I guess it was round 6 hours.  It was a small bus filled with many other people from our tourgroup, nearly all of them were in their 60s to 70s. As many of you know some Chinese can be rather noisy when traveling and this meant no sleep at all during the entire trip. Thankfully the bus had a small TV and the bus driver was so nice to play some Stephen Chow movies which helped to forget about all the noisy non-stop chatter and food throwing around.  Sadly we didn’t had the best weather during that time but at least it wasn’t raining when we reached Jianmenguan Pass. There we had the option to go straight to the fortification by walking for 30min or take a cable car half way up the mountain and walk from there 45min to the fortification and the little town behind it.  Of course there was also an option to get to the mountain top  where now also a viewing platform made out of tempered glass is crowning the top but that would have costs an additional 30 Dollars per person and there was simply no time in the schedule for it (tour groups rarely leave space for going around on your own).

Nearly the entire tour group decided for the option to go half way up the mountain and then walk to the fortification with only few people deciding on the shorter way. To our surprise there was a little extra for the more adventurous people after the cable car ride, the Birdsway! Me and my wife took it of course as we had no desire to walk on a normal street around and I quickly regretted that decision. First of all this path went up some stairs, bazillion of stairs to be precise. But that wasn’t the bad thing yet, not even when the stairs started to go straight up the mountain side with only a chain to hold onto. No…it wasn’t the worst part though it was very exhausting. The worst part for a person like me with Acrophobia (fear of heights) was when the small path leading up the mountain became suddenly 30-40cm wide with only a chain protecting against falling down the cliff side! As I am so afraid of heights I can’t really say how high this cliff side was so it could be anything between 30-100m. Even though the view was stunning I was terrified up there and it wasn’t helping at all to see other Chinese tourists leaning over the chains to take some crazy selfies.  I was just so relived when the path ended and the normal way around the mountain started again. Mind you, it was still exhausting as there were still hundreds of stairs going up and down but no more cliff side craziness.

The rest of the hike was going through a beautiful landscape full of old cypress trees and from time to time some small bamboo groves. Needless to say the wonderful landscape and peace was always interrupted by some food stalls standing in the middle of nowhere clustered with dozens of tourists enjoying their 10th cup noodle (must be some kind of challenge to stop at every food stall and eat noodles!). Funny enough people always assumed there that I am from Xinjiang, don’t ask me why. In the end we reached the famous fortress at the Shu Road which enabled small forces to hold against huge armies due to its strategic position. Afterwards we still had to walk for a few minutes until we reached a little village located there and have our lunch with the rest of the tour group. What I still remember about the food is that the tour guide “prepared” us for 15 minutes during our trip to the mountain that every dish will have tofu and is super delicious, repeating tofu and delicious about 100 times. But yes, it was indeed delicious!

Do you have a fear of heights?