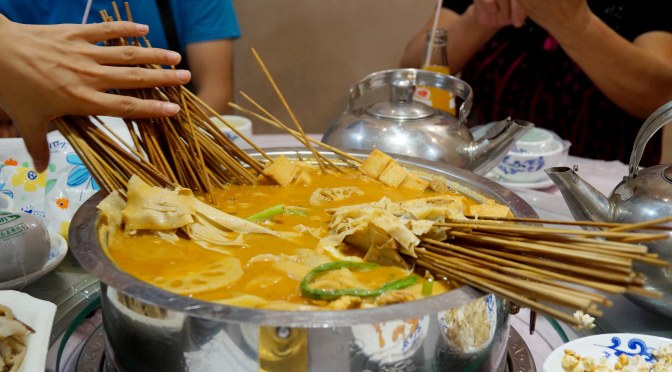 Over the past months, nay years I realized more and more that it is not only my dear Chinese mother-in-law who is a bit odd but pretty much the whole family. Not that every family has anyways their own oddities but I am just amazed about the abundance of sheer madness in my wife’s family. Yes, my wife has noticed it as well and has her own battles to fight because of it…on a daily basis thanks to the WeChat Family Group.

There is not much to add about my mother-in-law. She is crazy and that’s it. FIL has also left the road of normal sanity years ago but that is due to living so long with his wife. Now there are few more family members I barely ever mention because MIL always took the spotlight but today is your lucky day to find out more about them (to some degree). So who we all got there in the closer (MIL’s) family ? There is Granny, Aunty, Uncle, little sister (cousin) and little little sister (cousin). The thing is I don’t even know their names except of the cousins. In no particular order they have their own traits or history such as the one who likes to touch other’s posterior, the one who was in prison for robbery, the one who has never money but still travels the world, the one all neighbours run away from and the one who one falls all the time for pyramid schemes.

Sounds rough doesn’t it? I won’t link those points to anyone of them now as that would be just cruel but I think you might get now that MIL does not count as unnormal in the family. As I don’t want to go into the “special traits/ history” of the family I will just throw in some of the things I experienced with them. For example this spring we were all in China, even my dad was with us. We had only one family gathering and that was not even at Granny’s/ Uncle’s home as usual, because Granny was too embarrassed that my dad would see that apartment. Not that the apartment is small but pretty much in ruins as they have not even really cleaned up there for the past 8 years (according to my wife). So we had this family gathering in a Hotel which offered a huge buffet, even with Western food. I already wrote about this particular event in the post “At the Guangyun Lake” but I still have to mention that Granny ate two whole plates of raw seafood and guess what, she got terrible food poisoning. She never had eating such food before and there she just piled to plates to their limit and devoured everything in few minutes. My wife even warned her Grandmother about it but you know the drill about telling your Elders what to do in China, they won’t listen…

Another story is about Uncle. He is the youngest of the three siblings and the one living with his family together with Granny. A few years ago he got a well paid job at the company of one of his old school friends. After some time working there he/ his wife decided it is time to show some wealth and get him a Louis Vuitton wallet (or was it some business bag?). Here again my wife asked them if they are 100% sure about it and they answered “Of course, just go to the shop and take some pictures of the best ones”. So we went to the Helsinki LV store and the embarrassment for my wife began. She told the sales person that she is there to find a wallet? for her Uncle and needs to take pictures. She quickly found something nice and Uncle was happy with it immediately. That was untill my wife send  the price and the answer was like “is there perhaps something smaller?”, so my wife got the same thing a size smaller. Again Uncle and his wife were happy untill they heard the price. Here again their reply was “Is there perhaps something even smaller?” and yes there was actually something even smaller and cheaper. By then the sales person had already a questioning look on her face. You can guess what happened here again “is there something smaller?”. The sales person even showed other products untill they reached the key chains level but no, Uncle and his wife were suddenly not so keen about showing wealth any longer. Long story short, we spent nearly 3 hours in that store going through a multitude of different LV products were the most expensive was over few thousand Euros and downgraded slowly to products costing about 150 Euros. The thing for my wife was also she knew most of the staff there (many Chinese!) so it was a matter of losing face for her.

Let’s talk about Aunty. She is the younger sister of MIL. That alone is already fact enough to feel sad for her. There are many stories as well about her but I will only tell you about the most recent one from a few weeks ago. Last week, it was a rainy day and my wife had just dealt with her competent MIL when Aunty sent her a picture of a sofa with the text “Buy me this one”. Nothing more, just a picture of a sofa without any brand or other hint where that might come from. After asking Aunty several times she still did not tell her the brand just “Oh, I saw this sofa here in the store and it says it’s from Germany so you MUST know it”. Yeah right, anything advertised in China by being Made in Germany must be known to my wife by now, can’t be that many products. After hours of sending messages Aunty basically wanted that we buy for her that sofa here in Germany and send it to China. Her train of thought was that the sofa costs in China roughly 2000 Euros so it must be much much cheaper in Germany and sending the sofa must be cheap as well. She was rather confused when she got to know that the sofa was only few hundred Euros cheaper here than in China and the delivery would be far over 2000 Euros. She hasn’t contacted my wife since then but I guess soon there will bet yet another ridiculous request.

Oh, I realize my time is up already (wife staring threateningly at me as I haven’t done the dishes yet) so the stories about little sister will have to wait. By the way, stories about little little sister won’t be published any time soon anyways as truth to be told she is still too young to know better so perhaps in another 8 years I might bring her up again in case things haven’t improved.

Have you ever felt that one whole family is pretty much out of their mind?

23 thoughts on “Family is the Best”