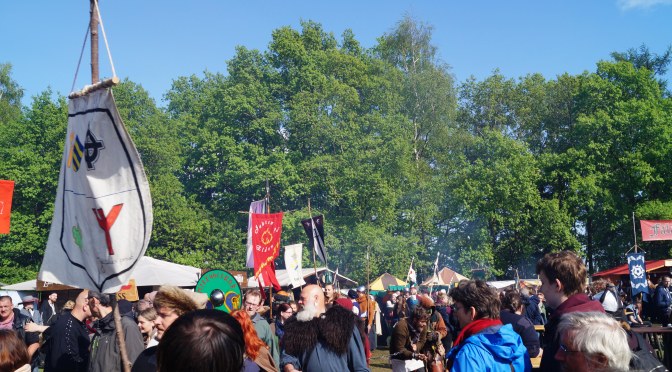 Last year I wrote about the little medieval market we visited during the 888 years celebrations of my hometown. Shortly afterwards I gave you some impressions from a much bigger renaissance fair near our place. Back then I was thinking how great it would be to dress up as well like so many other people were doing it at the big medieval market. Lets just say my wife and I were gathering some stuff since last year and put it into use last month.

Back in May just a week after we arrived from China it was time again for the renaissance fair near my hometown. The whole event was going on for three days but we chose to go only on one day (the middle day) as it is pretty tough going around with a little kid such as Nathan in addition to be rather pricey when thinking about the tickets and food there. We immediately regretted that we didn’t go during the first day because the weather changed for the worse. We had all the time sunshine till the day we wanted to go to the fair. The day started without any sunshine, instead it was all grey in grey but on the bright side it was dry. Guess I was too happy too early about having no rain as the first downpour out of many started right after we arrived at the fair.

Even though the weather wasn’t the best the festival area quickly filled up. All over the place they had tents to give shelter from the rain and huge bonfires to get some warmth in case the Met wasn’t enough. Due to the bad weather Nathan was forced to wear a jacket and thus couldn’t present his Chinese Emperor costume to the world. My wife was wearing a Chinese dress she bought in China plus all the accessories and I had created my own personalized clothing since last year. Okay I didn’t made anything myself as I bought most things and my mother actually tailored me few parts as well. I fashioned my costume, as a Lord of the Rings nerd, after the Rangers of Ithilien. Sure it is not authentic but it looks alright in my opinion. As this renaissance fair’s motto is also “Not Authentic but Phantastic” it fits just well. You could see people with real clothes from back in the day but also many Elves, Orcs, Trolls, Pirates and last but not least also a guy wearing a Unicorn dress…

I wanted to take so many pictures there this year again of the whole area plus of ourselves but the weather wasn’t on our side. I didn’t want to damage my cameras in the rain thus I ended up with just too few pictures which I took in the rare rainless minutes. Due to the bad weather we also stayed only for a few hours. Right when we wanted to watch the Bruchenball tournament (some kind of rugby game with a 30kg heavy ball…check out this link for some pictures) I spotted huge dark clouds approaching and we hurried back to the car. Just when we arrived some real big storm started to bring hell on earth as huge hailstones threaten to destroy my car. Anyways we arrived safely back home and were happy that I spotted those clouds as it would have been no fun to be in the renaissance fair with that storm.

For this year we have planned to go to another renaissance fair in September managed by the same organizer. That time it will be in Hamburg and we hope to go there for two days and stay overnight at my cousin’s house who lives just 5 min away by car. The organizer is doing nearly every weekend such festival in different cities all over Germany but we think that going to two of them is more than enough due to our limited free time and of course due to the high costs involved.

Have you dressed up for some event/ did cosplay?