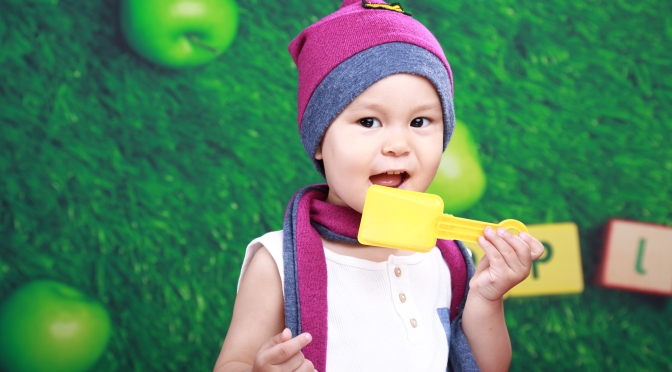 Indeed, our little Nathan had also a crazy photoshoot same as his parents had several years ago in China. Okay it was not only one photoshoot but actually two different ones but that was due to my crazy Chinese mother-in-law. Why? Oh well, she messed up as usual but more about that later on. You might remember that the photoshoot we had back in 2011 is not one of my fondest memories as it was pretty much a day of torture for me. Now just imagine how to make a 1 1/2 year old kid pose for the camera for several hours…yeah it won’t really work.

Enough of the introduction and lets talk a bit about the first session Nathan had to endure. Appearently the first company they went to with Nathan was not the perfect one. MIL won from some kind of prize competition a photoshoot for children worth 500RMB. This was pretty great at first until they went to that place as everything was kind of run down and broken plus some of the items the children are supposed to pose with were empty German beer kegs. Each and every single thing was broken there and dusty enough that you might think that the place was a movie setting from Tatooine. The next problem were the clothes for Nathan. My wife brought some clothes she had ordered beforehand from Taobao and it was a good decision to do so as barely any clothes they had at the photoshoot were fitting or any good-looking for our little one. Needless to say my wife was not pleased at all about where her mother had taken them but MIL had already excuses as nothing is ever her fault. In the end she blamed her friend whom she had asked about the location and this friend said it was okay. So no way on earth it was MIL’s fault by not checking out this company beforehand!

Apparently it was also not Nathan’s best day as he was very grumpy but I guess it was also due to the jet lag as it was just few days after the arrival in China. I don’t know how but through some dark magic the photographer managed in those two hours of demon baby running around to get few decent shots. You know when you pose for some pictures you know where to stand as the photographer will give you basic commands what to do, how to smile etc. This does not work with a little kid. Everything and really everything is just pure luck. Little Nathan the Satan won’t just stand there holding a toy airplane and smile into the camera, no…he will take that airplane, throw it in some corner, turn around and crawl somewhere as crawling on a dusty ground is so much cooler than walking. In the end some pictures ended up pretty well and my in-laws even got a huge picture for their wall (the monk picture above).

The second photoshoot company was a total different matter. My wife spent several days researching all about this topic until she settled on one company. Everything also went well except two things which somehow happens every single time we have to be somewhere at a certain time. First of all MIL never wants to “book” a taxi as according to her it is no problem to get a taxi on the street. Yes, usually it is not a problem but when your appointment is around the time the taxi drivers have their shift change it is a huge problem. This always results that the heavily crowded busses are the main mean of transportation. The next problem is that it is impossible for my in-laws and my wife to find the right location. I don’t know if it is normal in China but it happens all the time with them. They roughly know where to go and it pretty much stops there already. Going around buildings and asking people where to go for at least one hour is nothing special. Now you can see why for this photoshoot Nathan was nearly two hours late resulting that a long waiting time was needed as the photo appointments of other children which were supposed to be after Nathan were suddenly before him (thank you MIL).

This second place was the exact opposite of the first company. Everything was clean, only few things were broken and the staff was pretty good in cheering up the kids to make them smile. Furthermore they did not push with one child through the whole session but gave after 5-10 min  the kids (and the family) some rest and took pictures with another child. Though Nathan was still very great in avoiding in front of the camera what he was supposed to do the photographer adapted always quickly to the new situations and was able to take many great pictures in the end. Also the whole family left less exhausted and annoyed than after the first photoshoot as everything (except the arrival) went very smooth.

What are your experiences when it comes to take pictures of children?