It is week three in my old-new hometown and nothing is done yet. Our apartment is still under construction, German bureaucracy is killing us and still no job on the horizon. To take our minds away from all the troubles we decided to go to the Designer Outlet Center in my city for some shopping frenzy.

This Designer Outlet is a pretty interesting thing as it does not fit into the image of my hometown at all. Neumünster is, lets say, a very boring town with nothing at all to do there. The only good thing so far is the fact that it is located in the middle of the state of Schleswig-Holstein, thus making trips to the nearest cities like Kiel and Hamburg very short. But apparently something big happened in 2012, the Designer Outlet opened and attracts ever since then a huge amount of visitors and tourists from other cities and countries. I had been at this place already before but didn’t pay so much attention to it but now, as we need pretty much everything new in our home, it feels like heaven to have this outlet center here.

There are not only all kind of brands people desire (at least this is what I heard, I have no clue about clothes and kitchen ware) but there are also few restaurants and Starbucks. Okay, Starbucks I will never enter as I just don’t like the coffee there, but actually seems to be a tourist magnet on its own. The Outlet Center has been build to resemble an old middle European town with each building housing at least one store. I wonder why they chose to create this little town in this certain style but I must say that it looks pretty neat. I believe it takes half day to visit actually each store but I will never try this unlike my wife who seems eager to stay there from morning till evening closing time.

When we visited my wife asked me why we didn’t go there with her mother during Spring time when she visited for three months. Well, actually she did not remember that she did not want to go to there with her mom because of MIL’s insane shopping frenzy. As I know MIL by now, she would refuse to leave the shopping area and camp there to be the first to enter at opening time. Nobody would be able to drag her away from that place so it was pretty smart by my wife not to mention the existence of the Outlet Center. Yes, I have indeed a crazy Mother-in-law but at least she is not spending (yet) every penny on such stuff. 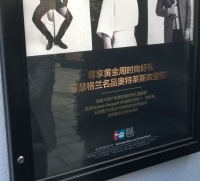 It seems also that the Outlet Center is an attraction for Chinese Tourists.There is even one Chinese tourists organization doing bus trips to Neumünster to go specifically to that one Outlet Center and furthermore two big Chinese restaurants opened in the past two years as well. I can’t say much about the quality of those restaurants as I still have to visit them but there are certainly many Chinese in the Outlet Center.

In the end I can say, or actually my wife that it is just great to buy some needed kitchen ware from certain brands so much cheaper than usual. I doubt that I will be there too often in the following years but I bet my wife will be there especially after our apartment is done to purchase all kind of (weird) things.