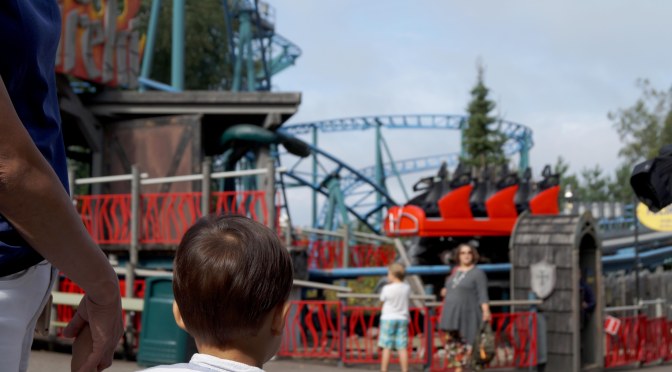 Here we go now with the second part of our holidays in Finland. Today the blog post will be a bit different, similar to the article Nathan’s World from 2014. We had a great time at  grandparents cottage for the first 1 1/2 weeks but it was time to leave and travel to Helsinki for another four days before returning back home.The trip started too early for me, my mom woke me up so early that it was still dark outside! I can’t remember really what all happened but suddenly granny kissed me and said goodbye. Before I could do anything I was in grandpa’s car and we were driving somewhere. As always I fell asleep in the car and woke up in some weird town where we took a bus. Dad mentioned something about “This is so cheap, cheaper for all of us than a single train ticket!”. I don’t know how cheap that is but I was certainly not comfy in that bus. It was soo full of tall people and the bus driver was making weird Finnish jokes over the microphone all the time. At least I was able to sleep a bit more and when I woke up, guess what, yeah another city again. What a strange thing, seems like each time I sleep these days I wake up somewhere else. My parents talked about this strange place called Helsinki, can’t remember that I was ever here before though.

From this strange Helsinki place we went by bus to another strange Espoo place. There some Chinese man waited for us at the bus station and helped my parents to carry some stuff. We all went to an apartment and it was full of people and even a little princess! All the people were talking non-stop so I went to play a bit hide and seek with the little princess, what fun that was. It got even better when daddy finally had the airbed ready for some non-stop jumping action with the princes. This “bum bum 跳跳 (Tiao Tiao)” is soo much fun, can’t understand why my parents looked so annoyed. Anyways at some point I was forced to go to sleep again but at least when I woke up I was still at that great place with the airbed.

After getting some breakfast from Chinese crazy granny we took once agin a bus back to this Helsinki place. My parents surely surprised me when we went to this wonderful theme park called Linnanmäki. Wow it was so much fun there and it seemed my parents didn’t even use any of this strange money thing. Still don’t understand this money, they need it for everything but always complain that they don’t have enough. Crazy Chinese granny was doing stupid stuff again and I nearly had to throw up after being in a ride with her as she was spinning this wheel all the time. Mommy was kind of angry with granny later but it seems that granny didn’t do anything wrong and that it was actually mommy’s fault, I don’t really understand granny sometimes. The food at the theme park was wonderful, so many french fries and ketchup! We should eat there more often. Later daddy went away to meet with uncle Tatu and some other friends and he only returned shortly before I was going to sleep, they must have a lot to talk about.

Next day I woke still up at this place, are we staying here forever? We all went again to strange Helsinki and went to a place full of Moomin stuff! Wow, so many Moomins everywhere but suddenly we left and I didn’t get anything, bad people. A bit later we were at some place eating Chinese food, it just tasted like China, we should come back here more often.  Afer this we were in some kind of park and there were so many children. Even the police was there and I think my parents tried to get my arrested as they always wanted to put me on some police motorcycle, good that I fought against it, I am too young for the prison. Daddy called this Lasten Festarit at Töölönlahti, no idea what that is but it was fun. Mommy showed me some kids who were doing kicks and said that I would do this Tae Kwon Do as well soon, looks certainly interesting I just hope they have french fries as well there. There was so much to do together with the little princess, jumping, running, singing, eating lollipops but somehow the old people looked so tired, what a lazy bunch. We left the park and crazy granny pointed out some sea gulls but daddy said that it was actually a swam, don’t know what is true.

We left those nice people and went together with mommy, daddy and crazy granny to some restaurant were other people were waiting for us. Guess what there were two other little princesses and we had so much fun running around, unplugging some lights and having crazy granny running after us all the time. I don’t know when we got back to the airbed place but I woke there up again later. Something was wrong as it was too early again and we took a big car called taxi where we put all our stuff and drove to Helsinki again. There we took this great train and shortly after that we were again at the airport where I had been few times before. Crazy granny was doing crazy things at the security control again, she is just so funny but the security staff didn’t seem to like her funny stuff. Anyways it seemed that the great fun in Finland was over because later we arrived in Hamburg again and took once again a bus, I am getting sick of these buses…