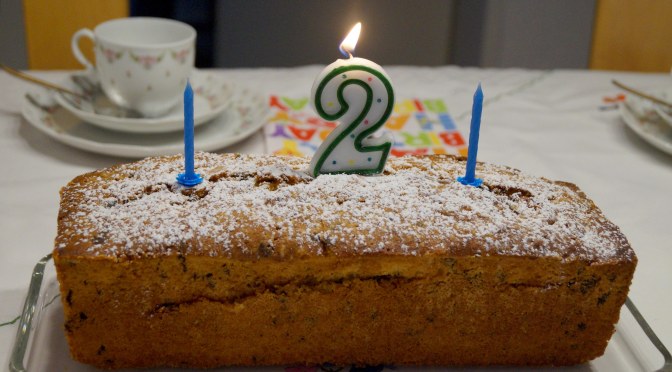 Time flies by so fast that it feels for me that Nathan just celebrated his first birthday few weeks ago. But no, it is already one year now! Today he turned two and we had a very small celebration. Last year my wife planned his first birthday for several weeks and invited a lot of people. This first birthday was mainly for herself rather than for Nathan but that is okay, he won’t remember the chaos anyways and my wife could let her creativity go wild with the decorations.

This year it was just us, my parents and my brother with his girlfriend. Also we did not celebrate in our apartment but at my parents. Not because we are too lazy to decorate our apartment (okay, perhaps a bit lazy) but these days Nathan spends anyways a lot of time with his grandparents. Besides that my mother was cooking lunch for everyone so it would be not so convenient to bring everything to our apartment. This “party” was so different from last year but I also liked it as it was much more peaceful with a lot less cleaning to be done in the end. He got some nice little gifts and thus far he just loves the Brio Train Set he got from his grandparents, at least he doesn’t even wants to leave it alone and eat or drink something.

After this summer Nathan will go to kindergarten and I bet that next year a handful of hyperactive little kids will make the birthday party a lot more interesting/ exhausting than I would like to have. But in the end it is all for the kid so we will play along and try to survive! Now my last strength is leaving me and I am just too exhausted to write any more about this birthday…really wonder about the upcoming birthday celebrations in the next years and how I will survive them.

Do you have any tips on how to prepare for a birthday party with many little kids attending?