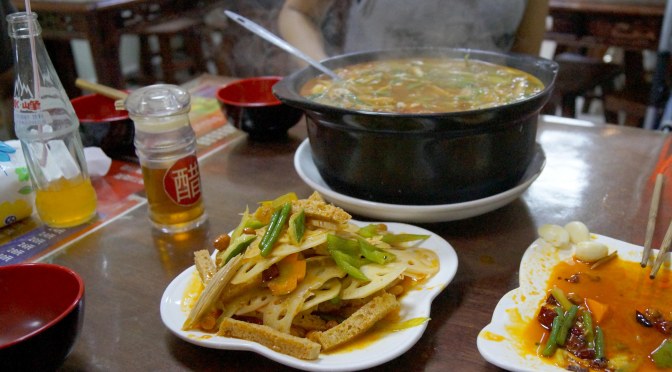 There are many reasons why I love to travel to China as I have already written once down in this post from last year. There I briefly mentioned food and my favorite restaurants. By going through my pictures from the past years I realized that the food part fell a bit short in that post so I decided to make up for it now. I know that I might bring the wrath of some people now upon me by sharing those pictures but I just can’t help it.

Chinese consider their food to be the crème de la crème of all the world and to be honest I mostly agree with that. Mostly? Because there is always some other food which is great as well (but not in the eyes of my wife and her family…prefering to eat in some run down Chinese restaurant in Germany rather than trying some local specialities, but that is again another story). I only need to mention 小五 xiao wu/ little five in front of my wife to receive death stares from her as xiao wu is the name of our favorite little restaurant in China just 2 minutes walking distance away from her parents home. Let me just tell you that it is surely one of the best foods I have ever tried and also far far away from our current location in Germany hence the death stares. Xi’an, as any other city in China, has tons of food to offer.

noodles as an example. Not only do they have the supposedly most complicated character but they do also taste superb. Then there are various cold noodle dishes liangpi 凉皮 of which I sometimes even dream of and then of course rou jia mo 肉夹馍 the mouth-watering “meat bread” you can find at so many places around the city. Whenever my in-laws are taking us to a new restaurant I am all hyped, not only because it surely will lead to another weird story due to MIL’s unreasonable character but also because I can experience new food once again. Of course I sometimes face food which I am not the biggest fan of right after the first bite but usually it is something amazing again.

One risk though when it comes to going out to eat with my in-laws is that I might end up with way too much food. They know that I love noodle dishes, particularly cold noodle dishes and also rou jia mo. Sounds great at first but when you do suddenly get two rou jia mo, one cold noodle dish and then some other dish it is a bit much for me. This certain flood of food I received when going to a restaurant in the city center famous for these foods. Well, I managed to eat it all but didn’t feel all too well afterwards for the rest of the day. Speaking of over eating. It is so dangerous with dear crazy mother-in-law as she piles up food non-stop on my plate and thus I learned to wait and see where she is sitting so I can find the seat farthest away from her. The thing is, even though my in-laws always order way too much it is never enough in the end. FIL can eat much, way to much for a guy his size. To put it in other words: he eats about triple the amount of food than me which equals pretty much half his body weight in my estimations. I better come now to the rest of the pictures before I start some more rants about my crazy Chinese family.

Do you have places you love to visit due to the food?

63 thoughts on “The Love for Food”