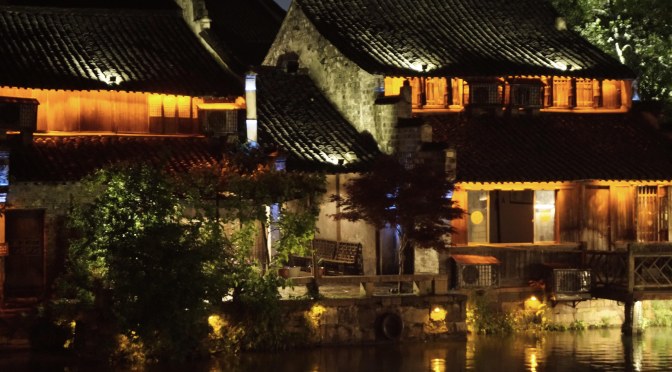 I warned you in the last post that the torturous city tour did not end at day two with the trips to Yangzhou and Suzhou.  Day three is the day when it really got out of hand with an insane plan for the day. It meant once again hours in a bus too small for humans, a howling monkey tour guide doing her best to keep us awake, tourist trap stops and spending too less time in the cities. Please not that this post is a bit longer as it was a very long day.

So I ended last post with the remark that we went to our hotel and were able to enjoy some eatable dinner. The hotel, as mentioned last time, was surprisingly good. In fact it was nearly a five-star hotel, everything was clean, no tobacco smell anywhere, a bathroom bigger than the first hotels main room and a nice view from our room at the 17th floor. My father and I were already looking forward to the breakfast as the previous days that part was never something good. Oh boy, we should never ever have hopes in China it seems. You see, first of all we went to breakfast at 6:30 which meant it was nearly one hour before normal breakfast time for this hotel. At first glance it even looked good until we realized that under nearly all the food covers at the buffet only emptiness was awaiting us. So what food was ready this time? Indeed, mantou and some more mantou BUT there I found coffee and even milk. Big mistake again. The coffee was undrinkable as it appeared that they used 1/5 with actual super strong coffee, 1/5 with milk (or something similar to it) and last but not least 3/5 of sugar. After one sip my stomach was in turmoil so I grabbed the milk and big surprise it was hot milk with a weird aftertaste. The time between this experience and the bus leaving for Hangzhou I spent in the bathroom…

Hangzhou was our next city on the agenda roughly 2 1/2 hours by bus. However after 30 minutes we stopped at a Pearl Museum. It sounded very nice and started off so well. There was this museum guide explaining the history of the freshwater pearls in China and how one scholar figured out how to cultivate them successfully back in the day. There were wonderful pearls on display, a dress full of pearls worn by Cixi 慈禧 and even a Buddha statue covered in pearls. As you might guess it was just the beginning which was nice at this museum because as we were walking to the next room we were suddenly in the biggest pearl selling place I have ever seen. First there were several rooms filled with hundred if not thousands of tourist at the different pearl selling stands. It was so loud and crowded, just so unbelievable how the whole scenery changed from a nice museum tour into this tourist trap within seconds. After we managed somehow to get out of those pearl selling rooms we were out of nowhere surrounded by vinegar selling stands then in the next room it was all about clothes and and and. We went from room to room, from floor to floor for about half hour until we finally got out. I am not kidding that they basically had everything to sell there what you might find in a huge mall, from jewelery over toys and clothes to food.

After this wonderful tourist trap stop we went on with our journey to Hangzhou. I don’t think I need to mention again how comfortable this trip was. The first destination in Hangzhou was Song Cheng, a large theme park with the architectural style based on the painting “Along the River during the Qingming Festival” by Zhang Zeduan. Once again it was just huge there and despite the terrible weather (yes, it was still raining) it was packed with people. My wife loved this place as she had watched before an episode of “Hurry Up, Brother or Running Man” 奔跑吧兄弟 which was shot in that theme park. I must say it was really nice there but of course we had just too little time there. The nice howling monkey reminded us once again that we had 60 minutes on our own there until the show “Romance of the Song Dynasty” would start. This gave us only time to visit few things there such as one of the great haunted houses (my wife is still scared) and a couple of amusement rides for Nathan. The show itself was incredible and what was even more incredible was that it was just huge there, the biggest theatre hall I have ever seen. All in all this was once again a place you could easily spend an entire day to see it all.

Again it was time for a bus trip for a half hour to reach the West Lake. There a little “ship cruise” was planned and while waiting for the ship/ tiny boat we could enjoy the beautiful scenery there. We could see the Leifeng Pagoda and the Jingci Temple on the opposite side of the lake. The ship cruise itself wasn’t that interesting except that we saw one ridiculous ship which looked like a giant dragon. As our howling monkey got lost in the park trying to find the way back to the bus we passed by many interesting spots within this park but sadly it was raining the entire time and thus I could not take any pictures.

Now then to my favorite part of this day. From Hangzhou we drove roughly 1 1/2 hours to Wuzhen, a wonderful little town. As the schedule was completely messed up we arrived there around 7pm instead of half day earlier. At first I was afraid it would be another tourist trap as I saw pretty much millions of busses in front but as soon as we went to the check-in area it was empty. All visitors have to leave the old village center till 6 or 7pm and only the inhabitants, inn-guests and workers can stay. We had some delicious dinner there (the best food for the entire trip!) and then had to find our own inn rooms in the old village center. The view was just incredible as during night-time all the houses and bridges are covered in lights. After getting our luggage to our guest rooms we went for a little tour around to take some pictures till most of the lights were turned off. I can only recommend visiting Wuzhen or even stay in one of the guest houses within the water town as it is definitely a place I would love to stay for a couple of days.

With this a very long day came to and end. It was certainly chaotic and only towards our last destination we could finally relax and enjoy the surrounding for a bit. After this night in Wuzhen only two days remained however they will be in one blog post as it is all about Shanghai (and some annoying side stops…).

Have you ever visited Wuzhen?