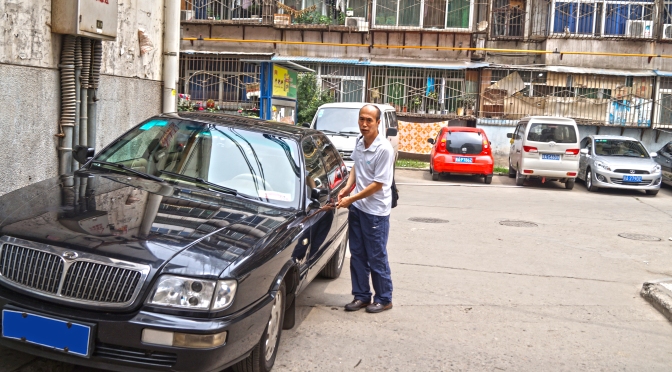 Last week I wrote about the often unpredictable behavior of my crazy Chinese mother-in-law. In the comments I was also asked how her husband is dealing with it all and I have here something like an answer.

All the general info about him I wrote already down in two other posts About Father-in-law and The Love for Table Tennis. For the ones who don’t want to read it all I give you some short summary. He is in his mid fifties, loves to play table tennis, eats tons of sweets, as an OCD when it comes to cleaning and is able to eat about double the amount of food for lunch and dinner than the rest of the family combined. In the post About Father-in-law I wrote that he is working as a driver in one of the city’s bureaus. This is no longer true as the whole department has been shut down by the government to safe some money. Now he is unemployed and bored as hell every day at home. For him it is not about being unemployed and not earning money but that he has too much time on his hands out of nowhere. Worst of all for him is that he is whole day home and so is his wife!

Wheras MIL is a very strong person he is more the weak one. He easily gives in when his wife has something to complain about and most of the times I think he is doing so in order to escape the endless annoyance of MIL by making her think she won once again and shuts up. I know this might sound mean but once you heard one of her charades you will understand. Come to think of, his wife always has something to complain about him but usually it is actually something she did wrong herself. She pushes down by accident some vase? His fault because he placed it there and so on. So how can he partially escape the madness called his wife? He plays with his phone some weird farming games or does so on the computer whenever he is not cleaning the apartment or watching sports on TV. The good thing for him is that MIL loves shopping and goes dancing and thus is often gone for many peaceful hours. I think he is always looking forward when MIL stays with us for three months…

Though he is very invisible when going around as his wife wants to be the center of everything he still shows his presence when needed. When we need something he goes off and gets it for us in an instant. When we want to cross the street he will go ahead and wave to the cars to let us through. When he sees my wife looking at something in the shop window he will immediately gives her money (though my wife always takes the money she returns it before flying back to Europe without anything spent). He is very caring but sometimes way too much as he gets afraid that something is not good enough. Everytime before buying something he will carefully check the item he wants to buy to make sure that everything is 100% fine. When going out to eat he will clean each cup, bowl and the chopsticks. At home he is cleaning the apartment twice a day, each time done three times. Because he is so worried all the time that everything works fine he has high blood pressure and from is former afro hairstyle nothing is left.

Of course we want to give him sometimes some nice presents but that is a futile effort. Not only does he not want anything but when he actually gets something from us he will store it safely away because he wants to wear/ use the old things first until they are broken. During MIL’s days as a model she often got some nice clothes and also gave him some. These days are over twenty years ago and still the clothes he received are originally packed and stored in his closet. Few years ago we bought him a new shaving machine, it took over a year until he used it and only because MIL threw away his old one as even threatening him that she will give the shaver to me would make him use it. In the end all I can say about FIL is that he is a very reliable person who prefers to stick to the background and is thus the exact opposite of MIL.

Do you also have a more quiet person in the family who is always there when you need her/him?